Transfer a Route within Kurviger or Save it for Later Use

Transferring routes within the Kurviger universe is very easy. You can use the same technique to save routes to use them later yourself. There are a few different options. Choose the option that works best for you.

You can create a .kurviger file by planning a route, go to the export dialog, select the .kurviger format and export the file.

You can show a QR Code representation of the route on the Kurviger Website (Share) and Kurviger App (Share → Route QR Code). You can scan this code with your smartphone using a barcode scanner app, like this one. Now the Kurviger App should open up and display the route. 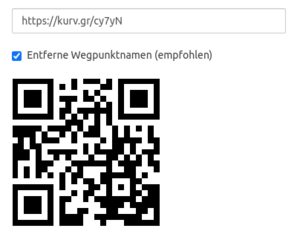 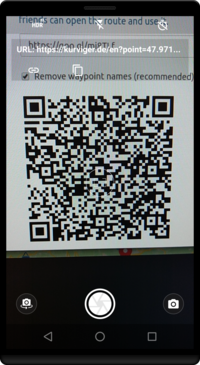 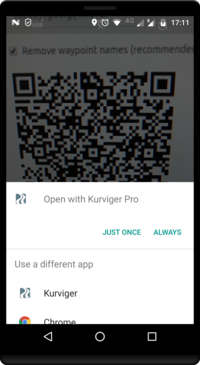 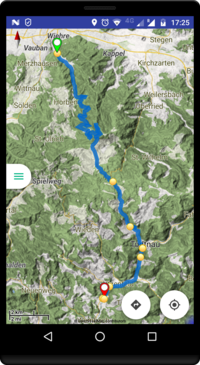 Links can be generated on the Kurviger Website and Kurviger App (similar to the QR code above). Copy the link, it should look like kurv.gr/abc12. Now open your favorite messaging or email application and send the link to yourself or your riding mates. You can also post the link to a forum or social media websites like Facebook or Twitter.

Some people like to create text files (like a Word document) containing links for every day of their multi day ride.

When exporting a GPX file for the use with Kurviger, we recommend to use the Route and no additional waypoints. It's important to note, that the GPX file does not contain the routing settings, like curviness. You need to select them after importing the GPX file yourself.

If you want to make sure, that the calculated route follows your initially planned route, you can export the Route and Track. Just make sure when importing to select the Route for the route calculation and the track for the overlay.

You can save a planned route on the Kurviger website in the Kurviger Cloud. You need to sign up for this. After you have signed up, click on Your Routes, select a folder you want to save the route in (or create a new one). Click on Save as new Route.

The route are now safely stored in your account in the Kurviger Cloud. You can open that route at a later point again. The great thing is you can do that a different computer without requiring access to something like a Dropbox.

Currently, you can use this feature to save a route. This feature is only available on the Kurviger Website right now. 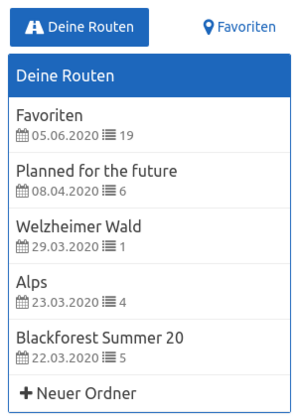