“what3words” is a service to encode and share geographical positions. Any position on the map can be transformed into a memorable set of words that can be shared by different means, including phone calls, texts (SMS), and email.

A very useful and important feature that could save lives! 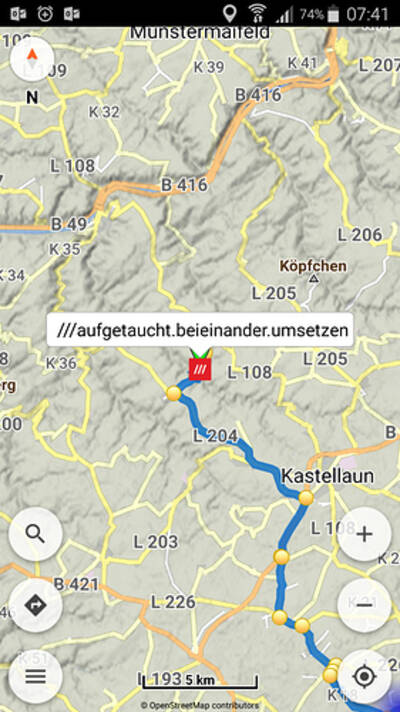 What is it - and what is it good for?

There are many situations in which it is necessary or convenient to tell others your geographic position as accurate as possible - for example you are cruising in a group and lost touch, or, much more important, you are cruising by yourself and had an accident far out and need help.

Of course you can give someone your GPS coordinates in a call, SMS, messenger (e.g. WhatsApp, Facebook), or email. However it is complicated to remember long numeric GPS coordinates, and in a situation of stress it’s quite impossible to do that without the risking mistakes or misunderstandings.

what3words provides a much easier way to encode a position - by a simple combination of three (natural) words, they can encode a rectangular area of 3×3 meters - accurate and worldwide! More information the accuracy of what3words can be found here.

To illustrate the process we chose an arbitrary position on a very curvy and small road in German Hunsrück mountains, just to have an example (you may follow it: it’s at the tip of a sharp u-bend - and let’s hope that nobody will have an accident there ever - but IF):

The GPS coordinates are (according to Kurviger)

Imagine you want to tell that position in an emergency situation, perhaps injured, by using a keyboard or even in a call …

But with version 1.2, Kurviger additionally provides the what3words code for this position - it is:

(expressed in the what3words code you would format the address like this: ///express.sill.masses)

the German version is

(what3words codes of geographic positions are usually leaded by a triple slash (///). If you are entering this in Kurviger, it is not necessary to add the slashes if you enter the word.word.word code into the search field.)

These three natural words (words in a natural language) are much easier to remember and to send than GPS coordinates. For example you could send via WhatsApp or you could easily speak them in a phone call.

Everyone who has a compatible app or device can now find your position easily and quickly.

And at least everyone who uses the what3words app on smartphone or opens the what3words map in a browser (have a look: https://map.what3words.com/express.sill.masses) will find your accurate position instantly:

How do I get a what3words position code on the road?

a) In Kurviger (internet connection is necessary): b) If Kurviger is not installed or no internet connection is available, you can use the what3words app:

How can a receiver of a what3words code find the position on a map?

The receiver of your what3words position message may:

b) in what3words app:

c) If the what3words code was sent by WhatsApp, the receiver gets a WhatsApp message with a OpenStreetMap link, which after a tap opens Kurviger with the position.

Have a test with “aufgetaucht.beieinander.umsetzen”!

Therefore, it’s good advice to get as much people as possible to install the free what3words app.

What is the advantage compared to sharing my position by e.g. WhatsApp or GMaps directly?

None - as long as the receiver has WhatsApp or GMaps installed and running; but if not: then what3words has the advantage that is works across platforms …,

and as long as you have a data connection; but if not and you have at least a mobile phone connection, then you could forward the code in a phone call (the what3words app only needs a GPS signal, no internet data connection),

or, let’s imagine, in these previous cases you only have a technical problem but no internet or mobile connection is available, and someone stops to support you, you could just tell him the 3 words and he then could continue his way and forward the 3 words as soon as possible to someone else who may come or send technical support to your position.